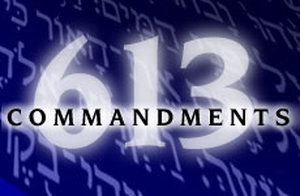 Taryag mitzvot; TaRYaG is the acronym for the numeric value of "613") are a list of commandments from God in the Torah., there is a tradition that the Torah contains 613 mitzvot (Hebrew for "commandments," from mitzvah - îöåä -- "precept", plural: mitzvot; from öåä, tzavah- "command").

According to tradition, of these 613 commandments, 248 are mitzvot aseh ("positive commandments" commands to perform certain actions) and 365 are mitzvot lo taaseh ("negative commandments" commands to abstain from certain actions). Three-hundred and sixty-five corresponded to the number of days in a year and 248 was believed by ancient Hebrews to be the number of bones and significant organs in the human body.

According to the Talmud (tractate Makkoth 23b), a Biblical verse states that Moses transmitted the "Torah" from God to the Hebrew people: "Moses commanded us the Torah as an inheritance for the community of Jacob" ( Deut. 33:04) However, there were two commandments which God delivered directly to the Hebrews: the first two of the Ten Commandments; these are phrased in the first person. The Talmud calculates that the numerical value of the Hebrew word "Torah" is 611. Thus, Moses's 611 commandments combined with the two directly from God add up to 613.

The tzitzit ("knotted fringes") of the tallit ("[prayer] shawl") are connected to the 613 commandments by interpretation: the number of knots on a gematria: the word tzitzit  in its Mishnaic spelling) has the value 600. Each tassel has eight threads (when doubled over) and five sets of knots, totalling 13. The sum of all numbers is 613. This reflects the concept that donning a garment with tzitzit reminds its wearer of all Torah commandments.

The 613 Mitzvot can be understood another way too. In order to understand this other methodology, you must first understand that there are both positive and negitive mitzvot. For example a positive Mitzvah would be to Worship God, a negative one would be Do Not Worship Any Other gods. So, understanding that, the mitzvot can be divided like this: 365 Negative Mitzvot (so you know not to do these bad things every day of the year)+ 248 Positive Mitzvot (this is the number of bones in the body. So, when you do these mitzvot you do them with all of your body)= 613