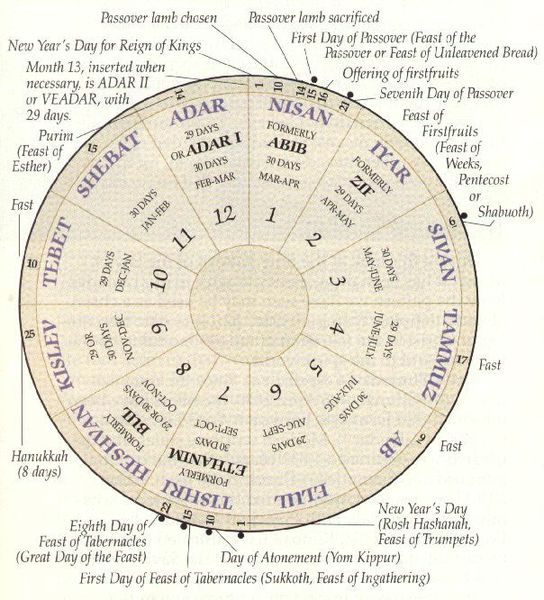 The modern Hebrew Calendar is a lunisolar ("luni"= moon, "solar"=sun) calendar, meaning that it starts its months at the new moon and uses years which are tied to the seasons of the sun. Each month has either 29 or 30 days, which are alternated as needed to keep in sync with the moon's 29.53-day period of phases. Similarly, either 12 or 13 months are included in the year to track the 365.24-day seasonal year. The Hebrew Calendar has Several Holy Days, shown in the illustration.

Calendars which track both the sun and moon are called lunisolar ("luni" = moon, "solar" = sun), and most of the world's early calendars were lunisolar. They use the months to keep track of the moon ("moonths") and years to keep track of the sun. Although virtually every country uses the Gregorian calendar for commerce, many countries and religions keep a lunisolar calendar for certain holidays. For example, the Chinese calendar and Hebrew calendar are lunisolar.

On our Gregorian calendar, the months are merely arbitrary divisions of the year. On a lunisolar calendar, every month begins at the new moon, when the moon is invisible, or on the first night when it is barely visible in the west after sunset as a very thin crescent. It takes 29.53 days for the moon to complete its cycle of phases, so lunar months approximately alternate between 29 and 30days so that they average 29.53 days in length. On a lunisolar calendar, simply knowing the day was the 15th of the month tells you that it was within a day of the full moon.

A lunisolar calendar also needs to have a year length equal to the seasonal cycle of 365.24 days, but 12 lunar months only total 354 days, which is about 11 days short of a year! It cannot use" leap days" to make the year come out right, because they are being used for the month. It was because this problem seemed hard and because people decided they didn't care where the moon was that led them to abandon the lunisolar calendar and switch to the Julian Calendar.

But the problem is not all that hard. One simply inserts an entire "leap month" when necessary to make the year come out right on the average. If 12 lunar months are about 11 days short of a year, then 36 would be about 33 days short, so about every three years a lunisolar calendar inserts ("intercalates") an entire 13th month. The Hebrew Calendar inserts 7 extra months every 19years in what is called the Metonic Cycle, after a Greek astronomer. That gives an average year of365.247 days which is better than the Julian Calendar but not as accurate as the Gregorian.

What is implied in a lunisolar calendar is that it is more important to know where the moon is than to have every season begin on exactly the same solar day every year. In reality, there is a lot of variation in just when seasons actually begin every year, so in practice a one month variation in the beginning of the year is not a problem for most farming efforts. In our modern world, however, there are other endeavors for which we would like more precision in the length of a year (such as financial dealings), so it is preferred to use the Gregorian solar calendar for commerce.

Other differences between the Hebrew calendar and the Gregorian are that the Hebrew day begins at 6:00 p.m. (formerly at the appearance of the third star after sunset), and the year begins in the fall, usually in September (on Rosh Hashanah). The Chinese year begins in January /February.

The week is a continuous cycle of seven days, which forms an uninterrupted day count. It turns out that seven days is the best length for a day count for a lunisolar calendar, because 7approximately divides into the length of the month (28 is near 29.53) and also the year (52 weeks= 364 days is close to 365.24). The Hebrew calendar is tied to the week in that the Hebrew year can only begin on 4 of the 7 week days. On the other hand, the Gregorian calendar is not really tied to the week at all. That is, even though we arrange the Gregorian days in a blocks of seven days, the Gregorian calendar is really totally separate from the week (except for holidays which tend to be on Mondays). When we switched from the Julian Calendar to the Gregorian, the week was not interrupted. That is, when the ten-day shift was made, Thursday, Oct. 4, 1582 (Julian), was followed by Friday Oct. 15 (Gregorian).

BACK TO THE TOP